The truth of the matter is that Arab Muslims who loathe Israel don’t really know history or geography. Click on the pic below for a larger look. 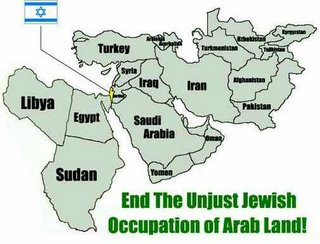 What’s wrong is that even as Israel completes its evacuation of more than 20 “settlements” in the Gaza Strip, palestinians still make the argument that Gaza remains “occupied” territory, even though palestinians exercise self-government and the Israeli civilian and military presence in these disputed territories have been removed.

This proves that the palestinian claim of “occupation” is just an excuse to kill Jews and the reason for this is that their religious leaders tell them to do it.