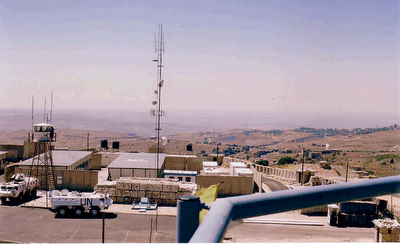 Folks, check out this picture. Click on it to open it up in a full sized separate window. Notice the UN watchtower, the UN trucks, and the UN buildings. Most importantly, notice the yellow Hezbollah flag in lower front.

This is just one picture that proves that Hezbollah and UNIFIL are indeed not only within the same vicinity, but are just 100 feet away from each other.

NOTICE: RadioRote is the owner of this photograph and if used by others, you must cite as such. Smooth Stone expresses its gratitude to RadioRote for permission to use this picture.

On July 26, the daily UNIFIL press release reported the Israeli bomb that had destroyed a UN post the day before, leading to UN Secretary General Anan’s infamous accusation that “Israel deliberately attacked the site”.

What the secretary general did not consider worth mentioning was the highly relevant information that attacks on UN posts by Hezbollah have been occurring almost daily and that Hezbollah have been drawing Israeli fire by lobbing their rockets at Israel from the vicinity of UN positions. The same UNIFIL press release reported that another UN position in the western sector was directly hit by Hizbollah mortar fire the same evening and that Hezbollah fired at Israel from the vicinity of four UN positions at Alma ash Shab, Tibnin, Brashit, and At Tiri.

On July 24, UNIFIL reported that one unarmed UN member of Observer Group Lebanon (OGL), was seriously wounded by small arms the previous afternoon originating, from preliminary reports, from the Hezbollah side. The UN evacuated him to the Israeli side, from where he was taken by IDF helicopter to a hospital in Haifa. He was operated on, and his condition was reported as stable. Of course there was not a word of thanks from the secretary general.

The July 25 UNIFIL report stated “This morning, Hezbollah opened small arms fire at a UNIFIL convoy consisting of two APCís on the road between Kunin and Bint Jubayl.”

On July 27 It was also reported that Hezbollah fired from the vicinity of four UN positions at Marwahin, Alma Ash Shab, Brashit, and At Tiri.

On July 28, UNIFIL reported that Hezbollah fired from the vicinity of five UN positions at Alma Ash Shab, At Tiri, Bayt Yahoun, Brashit, and Tibnin.