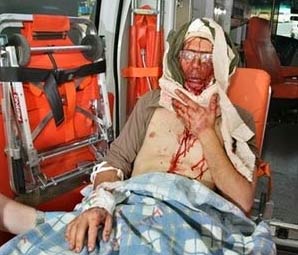 This is a picture of a Jew, bloodied by Islamic butchers. Look closely. Notice how the color of his blood is the same as the color of a Muslim’s .

Why does no one grieve for this Jew?

Where are CNN’s cameras? Where are the network reporters expounding endlessly about the suffering of the Jewish population specifically targeted by Hezbollah, the way they do for the “poorlebanesepeople”?

Israel lies within reach of all the weapons in the Arab world. The very fact that Israel’s population centers are under constant daily attack is a casus belli. No country in the world would stand for such a thing.