This current issue of the Hamas weekly has a cartoon of a Palestinian child urinating on the Statue of Liberty, which is holding a book labelled “Democracy”. This expression of utter disdain for the US and its democracy follows other recent slurs in the PA media. For example, the West was condemned in March at a Palestinian rally:

“for many years of trying to penetrate Islamic youth with dubious things such as the ideas of democracy.”
[Al Hayat Al Jadida, March 4, 2006]

Background Brief: Denigrating the Statue of Liberty in PA Cartoons:

Visual and verbal attacks on US symbols are standard components of Palestinian Authority hate incitement, and the Statue of Liberty is a symbol that has been mocked and denigrated in PA cartoons for years.

Palestinian cartoons of the Statue of Liberty, include [see two of the visuals below] :

It should be noted that except for this week’s Hamas cartoon, all the previous cartoons denigrating the US symbol of freedom were in newspapers controlled by Mahmoud Abbas’s Fatah party.

The following are two cartoons from the full collection.

1. Palestinian child urinating on the Statue of Liberty

2. The Statue of Liberty as a suicide terrorist 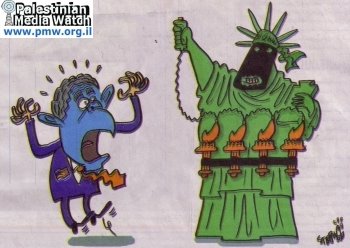 Click here to see the rest of the cartoons depicting palestinians and their disdain for America which the Presbyterian Church (here and here) refuses to admit to.