Graphic images smuggled out from Lebanon show how Hezbollah is waging war amid suburban homes.

A stream of images, obtained exclusively by the News Ltd, depicts how the extremists are using high-density residential areas as launch pads for rockets and heavy calibre weapons.

Dressed in civilian clothing so they can quickly melt back into suburbia, the fighters carrying automatic assault rifles ride in on trucks laden with cannons.

The photographs from the Christian area of Wadi Chahrour in the east of Beirut were snapped by a visiting journalist caught in the midst of the war, then smuggled out by a friend.

Images and footage of Hezbollah activities taken by local newspapers and TV crews are routinely seized by the group’s fighters at road blocks.

But in our images, taken clandestinely, a group of fighters are preparing to fire truck-mounted anti-aircraft gun just metres from an apartment block with sheets drying on the balcony. 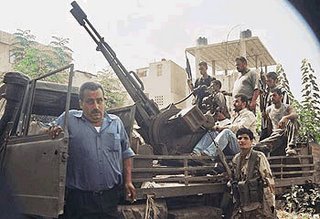 Others show a Hezbollah fighter armed with nickel-plated AK47 rifle guarding no-go zones after Israeli blitzes. Another depicts the remnants of a Hezbollah Katyusha rocket in the middle of residential block, blown up in an Israeli air attack.

The Melbourne man who smuggled the shots out of Beirut told yesterday how he was less than 400m from the block when it was obliterated.

“Hezbollah came in to launch their rockets, then within minutes the area was blasted by Israeli jets,” he said.

“Until the Hezbollah fighters arrived, it had not been touched by the Israelis. Then it was totally devastated.

“After the attacks they didn’t even allow the ambulances or the Lebanese Army to come in until they had cleaned the area, removing their rockets and hiding other evidence.

“Two innocent people died in that incident but it was so lucky it was not more.
`
`The people there were horrified and disgusted at what Hezbollah were doing.”

The fighters used trucks, driven into residential areas, as launch pads for the rockets, he said.

Another image shows a line of decimated trucks sitting behind a 5m wide crater.

The release of the images comes as Hezbollah fighters face increasing censure for using innocent civilians as “human shields”.

In addition, 20 Lebanese soldiers and at least 35 Hezbollah guerrillas have been killed.

Mr Egeland said when he was in Lebanon in the Hezbollah heartland he had said: “Hezbollah must stop this cowardly blending in among women and children’