The Fatah-affiliated Aksa Martyrs Brigades threatened on Wednesday to attack synagogues if Israel continued its excavation near the Temple Mount ahead of the planned construction of a new bridge to the Mughrabi Gate.

In a press release sent to newspapers, the group announced that all synagogues would become legitimate targets and that “the sanctity of the Al Aksa Mosque should not be less than that of the synagogues.”

The terror organization joined scores of other Islamic organizations in calling on the Palestinian people to hold processions and angry protests until the construction is stopped.

A Jerusalem court on Wednesday ordered the fiery leader of the Islamic Movement in Israel to stay out of the Old City of Jerusalem for the next ten days, after he tried to force his way to the site of a contested archeological excavation near the Temple Mount, police said.

Sheikh Raed Salah was one of seven Israeli Arabs detained by police near the Dung Gate on Wednesday morning.

Salah and his supporters had scuffled with police guarding the workers carrying out the salvage excavation near the Temple Mount.

In court, Salah accused Israel of “the crime of demolishing a part of the blessed Al Aksa compound” and of “pushing the whole region to religious war.”

Of course, Salah has never done anything to encourage religious war.

As Hugh Fitzgerald, one of JihadWatch’s experts, points out,

Look at a map of where the digging is going on. Look how far it is from Temple Mount. If anything were to be structurally threatened, it would not be Temple Mount but rather the Western Wall. But of course neither is.

The same cannot be said for the horrific archeological damage being done by the Arabs digging in and around Solomon’s Stables, destroying whatever they can that is identifiable as Jewish, just as they so often did and do with ancient Christian churches (look at the experience of the British archeologist Katheleen Kenyon, booted out of Jordan decades ago because of all the evidence of Christian sites she was unearthing; look at what happened to the Italian archeological expedition kicked out of Syria because of what was discovered at Ebla).

Everything upside-down and topsy-turvy. Yet it is reportred, without comment, by reporters who know nothing and, what’s more, refuse to do the simplest homework.

I’m unsure of the politics at this site, http://blog.bibleplaces.com, but it does present some excellent photos of areas around Israel. Use your own judgement. Here is a photo of the dig, from The Post: 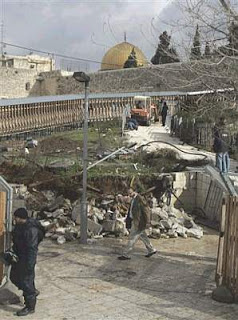