The following is a reprint with gratitude to Palestinian Media Watch for providing a plethora of evidence that the fabricated “palestinians” are just a tool in the more than a century of Arabs warring against innocent Jews.

Clearly, the entire purpose of Islam is to make the whole of humanity bow down to its cruel rule and ideology. Folks, the gig is up for some of us. How much longer will the rest of you fall for the fabricated cries of victimization from the “poor palestinian peepull”?

The Current edition of the Hamas website for children (www.al-fateh.net) includes short comic strips teaching children to hate the “Zionists”.

In a story called “dangerous games” two children find toys in the street, however “…these are not toys but bombs that explode in the hands of those who touch them. The evil Zionists place them here to kill the innocent children of Palestine”. 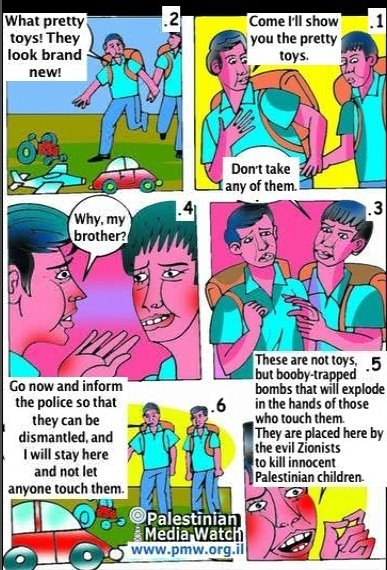 The following is the complete text of the comic strip:

-“Come I’ll show you the pretty toys”
-“What pretty toys! They look brand new!”
-“Don’t take any of them”
-“Why, my brother?”
-“These are not toys, but booby-trapped bombs that will explode in the hands of those who touch them. They are placed here by the evil Zionists to kill innocent Palestinian children”
-“Go now and inform the police so that they can be dismantled, and I will stay here and not let anyone touch them”
-“Yes! These are dangerous toys that are called booby-traps, placed by the evil ones to kill the people of our nation, who suffered from them and fight a Jihad to drive them out of our beloved country”

In the previous edition of the Hamas children’s site, comics were used to teach praise of terror: 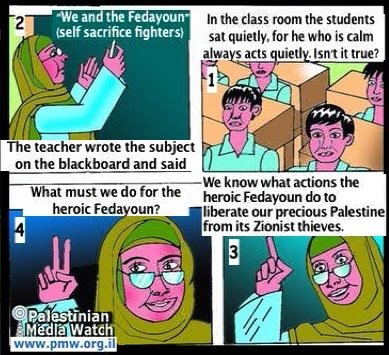 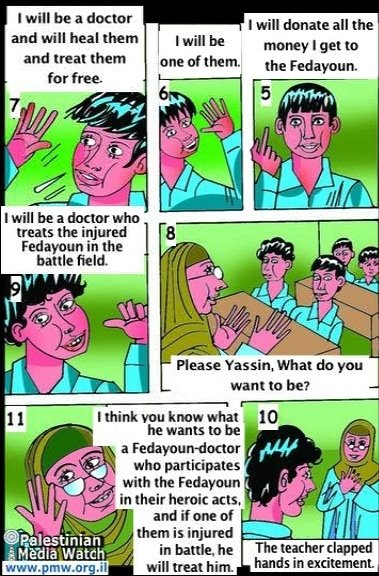