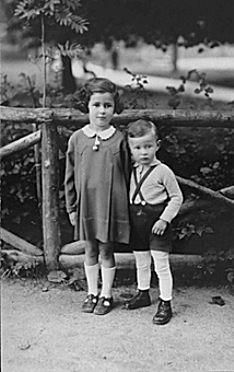 According to Jerusalem Post, the head of the German delegation to an international organization of Holocaust education and remembrance said that German youth are experiencing “Holocaust fatigue”.

Here is a picture of six-year old Anna and three-year Jon Klein, the children of Aladar Klein who never got the chance to know what “Holocaust fatigue” means. Both perished in Auschwitz. However, that’s still not a reason to stop teaching about Germany’s systematic and willful slaughter of the Jewish people which began 69 years ago, and continued unabated until American and British forces crushed the homidical Teutons in their own backyards.

The article was not so interesting to me, but some of the Jew-hating comments that were posted in response to the article left me disgusted.

Check them out here.