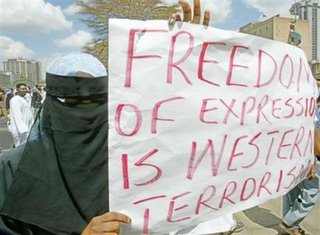 An unidentified Kenyan Muslim woman demonstrates in Nairobi, Kenya Friday, Feb. 10, 2006. Police shot and wounded one person Friday as they sought to keep hundreds of demonstrators from marching to the residence of Denmark’s ambassador to protest against publication of cartoons of the prophet Muhammad first published in a Danish newspaper. Police and organizers had said marchers would not be allowed near any embassy. At least 200 demonstrators tried to go the home of the Danish envoy, triggering clashes with anti-riot police near a major highway. (AP Photo/Sayyid Azim))

Of all the mendacity that pollutes Islam, this is one of the worst. Bumper sticker placards like the one above assume that the reader, listener and observer is not only stupid but suffers from amnesia.

See, folks, the west would prefer to believe that there is no problem between him and the general Muslim population but pictures like the one above prove otherwise.