Here is a photo of the dilapidated mosque of Omar, also referred to as “the Dome of the Rock” in Jerusalem and a photo of the first edition book in which it was printed, from 1922. Note the utter disarray and lack of use of the third holiest site in Islam. Like I wrote here,

“How odd. Weeds do not go untrampled in a highly trafficked area, do they? Buildings in use do not go without repair, do they? Based upon these pictures, the tale of the importance of al Aqsa in terms of its supposed “holiness” as the third holiest site in Islam should be re-written to represent the truth, not the fiction each of you have been spoonfed. 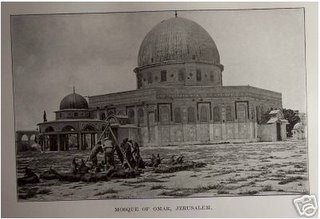 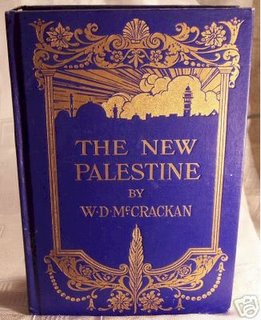 For those who believe the Palestinians’ claims of an ancient culture, forced exile from their homes, nationalist claims and a desire for peace, here is a set of quotations from Arab and non-Jewish personas who think differently:

The Palestinian claim that the land for centuries sustained a thriving Palestinian culture is not verified by the facts of history. Yet the world community has given this claim a receptive hearing. The now dead PLO Chairman Yasser Arafat in his speech before the U.N. in 1974 falsely declared, “The Jewish invasion began in 1881 . . . Palestine was then a verdant area, inhabited mainly by an Arab people in the course of building its life and dynamically enriching its indigenous culture.”

What happens when this claim is compared with the observations of the following recognized authorities?

In 1738 Thomas Shaw observed a land of “barrenness…. from want of inhabitants.”

In 1835 Alphonse de Lamartine wrote, “Outside the city of Jerusalem, we saw no living object, heard no living sound. . .a complete eternal silence reigns in the town, in the highways, in the country . . . The tomb of a whole people.”

In 1857, the British consul in Palestine, James Finn, reported, “The country is in a considerable degree empty of inhabitants and therefore its greatest need is that of a body of population.”

The most popular quote on the desolation of the land is from Mark Twain’s “The Innocents Abroad” (1867),

“Palestine sits in sackcloth and ashes. Over it broods the spell of a curse that has withered its fields and fettered its energies….Palestine is desolate and unlovely…. It is a hopeless, dreary, heartbroken land.”

For many centuries, Israel was a sparsely populated, poorly cultivated and widely neglected expanse of eroded hills, sandy deserts and malarial marshes.

Mark Twain, who visited Israel in 1867, described it in “Innocents Abroad” as:

“…[a] desolate country whose soil is rich enough, but is given over wholly to weeds – a silent mournful expanse… A desolation is here that not even imagination can grace with the pomp of life and action… We never saw a human being on the whole route…There was hardly a tree or a shrub anywhere. Even the olive and the cactus, those fast friends of the worthless soil, had almost deserted the country.”

As late as 1880, the American consul in Jerusalem reported the area was continuing its historic decline. “The population and wealth of Palestine has not increased during the last forty years,” he said.

The report of the Palestine royal commission quotes an account of the Maritime Plan in 1913:

“The road leading from Gaza to the north was only a summer track suitable for transport by camels and carts…no orange groves, orchards, or vineyards were to be seen until one reached [the Jewish village of] Yabna [Yavne]… Houses were all of mud. No windows were anywhere to be seen… The ploughs used were of wood… The yields were very poor… The sanitary conditions in the village were horrible. Schools did not exist… The western part, towards the sea, was almost a desert… The villages in this area were few and thinly populated. Many ruins of villages were scattered over the area, as owing to the prevalence of malaria and many villages were deserted by their inhabitants.”

Lewis French, the British Director of Development wrote of Israel:

“We found it inhabited by fellahin who lived in mud hovels and suffered severely from the prevalent malaria… Large areas…were uncultivated… The fellahin, if not themselves cattle thieves, were always ready to harbor these and other criminals. The individual plots…changed hands annually. There was little public security, and the fellahin’s lot was an alternation of pillage and blackmail by their neighbors, the Bedouin.”

Surprisingly, many people who were not sympathetic to the Zionist cause believed the Jews would improve the condition of the Arabs. For example, Dawood Barakat, editor of the Egyptian paper “Al-Ahram”, wrote:

“It is absolutely necessary that an entente be made between the Zionists and Arabs, because the war of words can only do evil. The Zionists are necessary for the country; the money which they will bring, their knowledge and intelligence and the industriousness which characterizes them will contribute without doubt to the regeneration of the country.”

Even a leading Arab nationalist believed the return of the Jews to their homeland would help resuscitate the country. According to Sharif Hussein, the guardian of the Islamic holy places in Arabia:

“The resources of the country are still virgin soil and will be developed by the Jewish immigrants. One of the most amazing things until recent times was that the “Palestinian” used to leave his country, wandering over the high seas in every direction. His native soil could not retain a hold on him, though his ancestors may have lived on it for 1000 years. At the same time we have seen the Jews from foreign countries streaming to Israel from Russia, Germany, Austria, Spain, and America. The cause of causes could not escape those who had a gift of deeper insight. They knew that the country was for its original sons (abna’ihi’lasliyin), for all their differences, a sacred and beloved Homeland. The return of these exiles (jaliya) to their Homeland will prove materially and spiritually [to be] an experimental school for their brethren who are with them in the fields, factories, trades and in all things connected with toil and labor.”

When Jews began to immigrate to Israel in large numbers in 1882, few Arabs lived there, and the majority of them had arrived in recent decades. Israel was never an exclusively Arab country, although Arabic gradually became the language of most the population after the Muslim invasions of the seventh century. No independent Arab or Palestinian state ever existed in the Land of Israel. When the distinguished Arab-American historian, Princeton University Prof. Philip Hitti, testified against partition before the Anglo-American Committee in 1946, he said: “There is no such thing as ‘Palestine’ in history, absolutely not.”

In fact, ‘Palestine’ is never explicitly mentioned in the Koran, rather it is called “The Holy Land” (al-Arad al-Muqaddash).

So, folks, where is that “thriving palestinian Muslim society” that supposedly lived in “palestine” since the beginning of recorded hostory? According to these sources mentioned above, it never existed. All of you have been fed a lie, probably the greatest lie ever pitched to ignorant Americans and Europeans in the last 60 years.