Folks, you know that photo of that smirking, arrogant cocky Muslim who holds a protest sign that says “May allah make a mushroom cloud over Israel” to represent how peaceful his fake religion is?

The following article is for him.

Keep smiling, punk. The next mushroom cloud you beg for, could very well be over Mecca and Damascus. So be careful what you wish for, cur.

Folks, I encourage you to read the following excellent article from Dr. Jack Wheeler, Silence in Syria, Panic in Iran, which can be read in full only if you register:

One of India’s top ranking generals assigned to liaise with the Iranian military recently returned to New Delhi from several days in Tehran – in a state of complete amazement.

And that was before September 6. Since then, it’s panic-squared in Tehran. The mullahs are freaking out in fear. Why? Because of the silence in Syria.

On September 6, Israeli Air Force F-15 and F-16s conducted a devastating attack on targets deep inside Syria near the c ity of Dayr az-Zawr. Israel’s military censors have muzzled the Israeli media, enforcing an extraordinary silence about the identity of the targets. Massive speculation in the world press has followed, such as Brett Stephens’ Osirak II in yesterday’s (9/18) Wall St. Journal.

Stephens and most everyone else have missed the real story. It is not Israel’s silence that “speaks volumes” as he claims, but Syria’s. Why would the Syrian government be so tight-lipped about an act of war perpetrated on their soil?

The first half of the answer lies in this story that appeared in the Israeli media last month (8/13): Syria’s Antiaircraft System Most Advanced In World. Syria has gone on a profligate buying spree spending vast sums on Russian systems, “considered the cutting edge in aircraft interception technology.”

Syria now “possesses the most crowded antiaircraft system in the world,” with “more than 200 antiaircraft batteries of different types,” some of which are so new that they have been installed in Syria “before being introduced into Russian operation service.”

While you’re digesting that, take a look at the map of Syria: 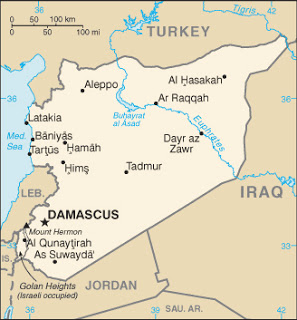 Notice how far away Dayr az-Zawr is from Israel. An F15/16 attack there is not a tiptoe across the border, but a deep, deep penetration of Syrian airspace. And guess what happened with the Russian super-hyper-sophisticated cuttin g edge antiaircraft missile batteries when that penetration took place on September 6th.

El blanko. Silence. The systems didn’t even light up, gave no indication whatever of any detection of enemy aircraft invading Syrian airspace, zip, zero, nada. The Israelis (with a little techie assistance from us) blinded the Russkie antiaircraft systems so completely the Syrians didn’t even know they were blinded.

Now you see why the Syrians have been scared speechless. They thought they were protected – at enormous expense – only to discover they are defenseless. As in naked.

Thus the Great Iranian Freak-Out – for this means Iran is just as nakedly defenseless as Syria. I can tell you that there are a lot of folks in the Kirya (IDF headquarters in Tel Aviv) and the Pentagon right now who are really enjoying the mullahs’ predicament. Let’s face it: scaring the terror masters in Tehran out of their wits is fun.

It’s so much fun, in fact, that an attack destroying Iran’s nuclear facilities and the Revolutionary Guard command/control centers has been delayed, so t hat France (under new management) can get in on the fun too.

On Sunday (9/16), Sarkozy’s foreign minister Bernard Kouchner announced that “France should prepare for the possibility of war over Iran’s nuclear program.”

All of this has caused Tehran to respond with maniacal threats. On Monday (9/17), a government website proclaimed that “600 Shihab-3 missiles” will be fired at targets in Israel in response to an attack upon Iran by the US/Israel. This was followed by Iranian deputy air force chief Gen. Mohammad Alavi announcing today (9/19) that “we will attack their (Israeli) territory with our fighter bombers as a response to any attack.”

A sure sign of panic is to make a threat that everyone knows is a bluff. So our and Tel Aviv’s response to Iranian bluster is a thank-you-for-sharing yawn and a laugh. Few things rattle the mullahs’cages more than a yawn and a laugh. Yet no matter how much fun this sport with the mullahs is, it is also deadly serious. The pressure build-up on Iran is getting enormous. Something is going to blow and soon. The hope is that the blow-up will be internal, that the regime will implode from within.

But make no mistake: an all-out full regime take-out air assault upon Iran is coming if that hope doesn’t materialize within the next 60 to 90 days. The Sept. 6 attack on Syria was the shot across Iran’s bow.

So – what was attacked near Dayr az-Zawr? It’s possible it was North Korean “nuclear material” recently shipped to Syria, i.e., stuff to make radioactively “dirty” warheads, but nothing to make a real nuke with as the Norks don’t have real nukes (see Why North Korea’s Nuke Test Is Such Good News, October 2006).

Another possibility is it was to take out a stockpile of long-range Zilzal surface-to-surface missiles recently shipped from Iran for an attack on Israel.

A third is it was a hit on the stockpile of Saddam’s chemical/bio weapons snuck out of Iraq and into Syria for safekeeping before the US invasion of April 2003.

But the identity of the target is not the story – for the primary point of the attack was not to destroy that target. It was to shut down Syria’s Russian air defense system during the attack. Doing so made the attack an incredible success.

Syria is shamed and silent. Iran is freaking out in panic. Defenseless enemies are fun.