She has disgraced the men and woman of our armed forces, she has cast aspersions about Pres. Bush, she has called terrorists “freedom fighters” and I no longer feel sorry for Cindy Sheehan, America’s Tokyo Rose.

Tokyo Rose was a name given by United States forces in the South Pacific during World War II to any of several English-speaking female broadcasters of Japanese propaganda.

The name is usually associated with Iva Toguri D’Aquino who was tried for treason by the United States government.

Although there is no indication that Toguri ever used the name Tokyo Rose, she was arrested on September 5, 1945 in Yokohama and was tried for treason after attempting to re-enter the United States in 1948, supposedly due to a media uproar. By this time she had married Felipe D’Aquino, a Portuguese citizen of Japanese descent.

Iva Toguri D’Aquino stood trial for eight “overt acts” of treason at the Federal District Court in San Francisco in July 1949.

Toguri was fined US$100,000 and given a 10 year prison sentence, of which she served more than six years.

D’Aquino appealed her case to the public on the television program 60 Minutes, and was pardoned by outgoing President Gerald Ford on January 19, 1977.

As of 2003, Toguri was a shopkeeper and resides in Chicago, Illinois.

Here is a picture of Tokyo Rose:

Here is a picture of Cindy Sheehan: 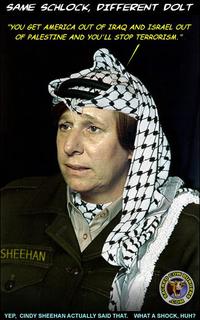