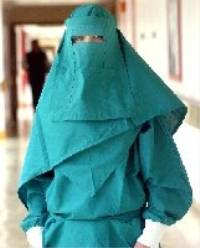 A hospital in northwest England has introduced a new surgical gown modelled on the burka, allowing female Muslim patients to cover themselves completely in line with their religious beliefs. The blue “Inter-Faith Gown” is the first of its type in Britain and has been trialled at the Royal Preston Hospital. It will be available to those who want it on November 1.

Hospital bosses said the gown — which covers the entire body from head to toe — provides extra comfort and cover for patients undergoing medical procedures and whose culture or religion requires more modest attire.
They described the response from patients as “overwhelming” and said it had attracted interest from a number of other hospitals around the country. The Daily Express featured the new gown on its front-page Tuesday. But the right-of-centre newspaper was critical, arguing that the gown’s introduction was an example of “political correctness” and skewed priorities. It added in an editorial that it was tantamount to special treatment for one group of people. “If people want to live in Britain, then they must accept British standards and the British way of life… The standard hospital gown is surely good enough for everyone.” You tell ’em, Daily Express. The paper reported that the gowns cost 12 pounds (18 euros/23 dollars) each. Folks, check out the enthusiastic 7th century comments by some Muslim women on the Muslim Public Affairs Committee forum here.