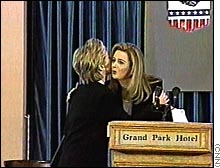 Bill Clinton’s presidential library raised more than 10 percent of the cost of its $165 million facility from foreign sources, with the most generous overseas donation coming from Saudi Arabia, according to interviews yesterday.The presidential campaign of Sen. Hillary Rodham Clinton (D-N.Y.) has for months faced questions about the source of the money for her husband’s presidential library. During a September debate, moderator Tim Russert asked the senator whether her husband would release a donor list. Clinton said she was sure her husband would “be happy to consider that,” though the former president later declined to provide a list of donors.So, if Bill Clinton got Saudi money, then you know that Hillary Clinton, the post-menopausal menace, got Saudi money. Those two don’t do anything apart except sleep together. This also explains Hillary Clinton’s penchant for Arabian things considering that on November 11, 1999, during a Gaza appearance with First Lady Hillary Clinton, Suha Arafat, wife of Muslim terrorist and pederast Yasser Arafat stated:

“Our people have been subjected to the daily and extensive use of poisonous gas by the Israeli forces, which has led to an increase in cancer cases among women and children.”

Moments after Suha Arafat accused Israel of gassing palestinian women and children, (but not the men) and instead of confronting Suha Arafat and asking her for evidence of her fraudulent claims, Hillary Clinton kissed her instead.